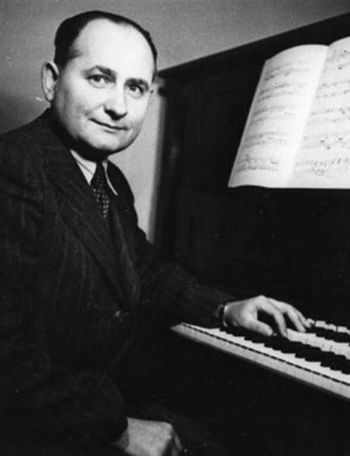 Alois Hába (21 June 1893 - 18 November 1973) was a Czech composer. Hába was one of the first to experiment with microtonal intervals including not only quarter tones but also fifth tones and sixth tones.

He studied in Prague, Vienna, and Berlin, and was made professor at Prague Conservatory in 1924. His interest in bird songs and his country's folk music led him to write microtonal music for string quartets and small orchestras. Instruments, including harmonium, piano and trumpet, were made for him and he wrote a book propounding the use of third, fifth and twelve tones. His works include a microtonal opera, "The Mother" (last performed in Florence, Italy in 1964), and orchestral, chamber, and piano music.

Alois Hába is name-checked (misspelled "Haba") in the list of influences in the sleeve of Frank Zappa's debut album "Freak Out!" (1966) under the heading "These People Have Contributed Materially In Many Ways To Make Our Music What It Is. Please Do Not Hold It Against Them".