Difference between revisions of "Tommy Tedesco" 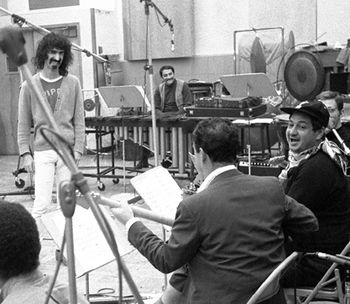 Frank Zappa, Emil Richards and Tommy Tedesco during the Lumpy Gravy sessions in 1968.

(Thomas J.) Tommy Tedesco (July 3, 1930 - November 10, 1997) was an American session guitarist and percussionist. He was also active as a jazz and bebop guitarist.

He furthermore had a long career performing on records by such music legends as The Beach Boys, The Everly Brothers, Elvis Presley, Frank Sinatra, Ricky Nelson, Sam Cooke, Ella Fitzgerald, Barbra Streisand,... Guitar Player Magazine once described him as the most recorded guitarist in history.

After suffering a stroke in 1992, Tedesco basically retired. He passed away from lung cancer in 1997.

Tedesco provided guitar, bells, bongos for Lumpy Gravy. According to Carol Kaye, he also played 12-string on Freak Out!; However, the album credits, and the session sheets from the Musicians Union don't support that story.

Tommy Tedesco is mentioned and thanked in the liner notes of The MOFO Project/Object (2006) album. [1]