Difference between revisions of "Matrix Numbers"

Like the catalog number, the ISRC and the EAN code, the matrix number is an additional information which can help to identify a sound recording. It consists of engraved (and/or printed) characters located around the label of a vinyl record (or the inner circle of a CD). These characters are used by the factories in the stages of records pressing.

It is important to notice that:

"When a vinyl disc was made, the first stage (after recording the music of course) was to cut an [sic] master disc, usually on an oversized disc made of aluminium coated in acetate or lacquer. A heated stylus (sometimes cooled by helium) would literally cut the groove of the disc into the lacquer and this master would be coated, electroplated (usually more than once) and finally stamped in a steam-heated press to produce the vinyl disc. In order to identify the acetate disc used to make a particular disc the cutting engineer would inscribe or stamp a reference number into the surface of the cut disc, between the end of the music and the space for the label. This is where the run-out-groove or scroll would be. Often this so-called Matrix Number would just be the disc catalogue number with A or B or 1 or 2 after it to show which side. Sometimes obliterated matrix numbers on discs can show changed release schedules.

Some companies (such as EMI on discs such as the 1960s Beatles albums) decoupled matrix numbers from catalogue numbers although there would almost always be a listing of the matrix number on the disc label. Even in these cases the matrix for the 'A' side would be lower than that for the 'B' side. In this way you can often identify discs where the A and B sides have been 'flipped'. Other information would sometimes be added to denote the pressing plant (many Elektra discs have this since individual LPs were pressed in more than one plant across the US) or give a sequence number to the cut or stamper. In the 1970s it became the fashion for disc cutting engineers to 'sign' their matrixes. (An example being Porky's Prime Cut') Sometimes cryptic remarks would be inscribed, and on one notorious occasion an Elvis Costello album had a message in the run-out asking people to phone the record company press officer and claim a prize! (But I digress.)

Elektra albums usually had matrix number consisting of the catalogue number and the side, but the 10-inch discs had JH numbers." 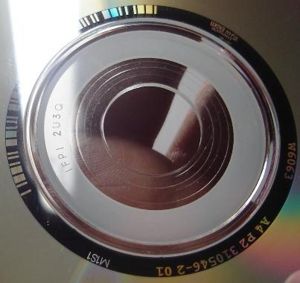 The SID Code[1] is an anti-piracy standard defined by the IFPI[2] and Philips[3] in order to track the source of optical discs mastering and replication. The use of SID Codes started in 1994 and grew until nowadays it has become almost systematic.

Since not all plants have both mastering and replication facilities, two identification codes have been implemented:

Sometimes also refered to as LBR Code (Laser Beam Recorder Code), it indicates the plant and LBR that manufactured the master or stamper used for the disc production.

It consists of the letters “IFPI” followed by a four or five alphanumeric digit code commencing with the letter “L”.

The Mastering SID Code must:

It is recommended that the space allocated exclusively for the code (determined by the user and LBR supplier) shall consist of an arc of 30º for the Mastering SID Code. It is mandatory that it is clearly separate from other features.

The mould SID Code indicates the plant where the disc was replicated and a serial number which can be set freely by the plant.

It consists of the letters “IFPI” followed by a four or five alphanumeric digit code. The first two digits (in the case of a four digit SID Code) or the first three digits (in the case of a five digit SID Code) are assigned to the operator of the manufacturing or mastering plant by Philips Intellectual Property & Standards. The last two digits of this code are allocated by the plant to give each mould on the site, including spare moulds, a unique code.

Example: the barcode printed on Francesco Zappa RCD 10546 is

The DVD SID Code follows the same rules as the CD plus addionnal requirements:

If the dummy side of the disc is made from a scrap program disc, it shall bear the SID Code, even if not metallised.