Difference between revisions of "Lenny Bruce" 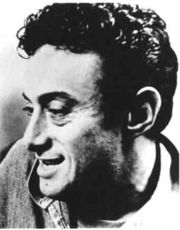 Bruce was discharged from the army for wearing women's clothing in 1945. He held various jobs while studying acting in New York. An appearance on the Arthur Godfrey Talent Scouts television show (October 1948), performing standard comedy routine, brought him national attention. The next few years were spent – as a stand-up nightclub entertainer – at numerous comedy clubs across the country refining what became known as "sick comedy" routines: his scatalogical and sardonic humour was alternatively called obscene and "radically relevant". In 1959 appeared on the Steve Allen TV show reaching a national audience.

March 12, 1963: Bruce sends a telegram to the judge in the Gate of Horn trial, Judge Daniel Ryan, accusing him of "illegal, unconstitutional, and most fascistic ... behavior" for trying him in abstentia.

"I had seen Lenny Bruce a number of times at Canter's Deli, where he used to sit in a front booth with Phil Spector and eat knockwurst. I didn't really talk with him until we opened for him at the Fillmore West in 1966. I met him in the lobby between sets and asked him to sign my draft card. He said no – he didn't want to touch it. At that time, Lenny lived with a guy named John Judnich. ... Compared to Jerry and Bill, Lenny Bruce was quite normal. At that time, according to Judnich, Lenny used to stay up all night dressed in a doctor's outfit, listening to Sousa marches and working on his legal briefs.

Lenny Bruce was also mentioned and thanked in the liner notes of The MOFO Project/Object (2006) album. [1]