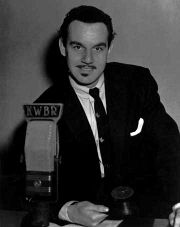 Name checked on the cover of "Freak Out!" (1966) under the heading "These People Have Contributed Materially In Many Ways To Make Our Music What It Is. Please Do Not Hold It Against Them".

By early 1954 Otis is back in Los Angeles where he discovers a young vocalist called Jamesetta Hawkins. Otis quickly records her as Etta James and produces "The Wallflower (Roll with me Henry)", with Otis on percussion and backing vocals by Richard Berry and The Peaches, it quickly became one of the first Rock and Roll anthems - probably helped a little by regular plays on Otis' daily radio show. The KFOX radio show would be another platform for Otis to present his artists including the young vocal groups The Penguins and The Medallions.

In early 1955 Otis inaugurated a series of shows at the Legion Stadium in El Monte and by the end of the year Otis was signed up to host a TV show on KTTV. In early 1956 the Mesner Brothers, owners of Aladdin Records, along with Otis, set up a new label called Ultra. The names was soon changed to Dig and Otis assumed the role of managing A & R. After several releases, including his own records, for Dig Otis is signed to Capitol records (his first major label signing) in 1957. Being a small fish in the large Capitol poll Otis gets little marketing support and his records for them do not sell as well as was hoped: Capitol even consider dropping the whole Johnny Otis band/TV show package. In the spring of 1958 Otis takes his whole entourage on tour in the UK where it is pointed out to him that teenagers frequenting coffee bars had taken to "hand jiving" to the records on the juke boxes. On his return to the US Otis records "Willie and the Hand Jive", a song building on rhythms popular from the 1930's and developed by Bo Diddley in the 1950's, which Capitol release with barely a mention to the media. By the summer the record has taken off featuring in the charts for four months. After decades in the business Otis finds himself an overnight success. Despite the song crossing over from the R&B world into pop charts Otis remained true to his roots and put together and all black show which is increasingly performing to white audiences. Otis is unable to provide Capitol with a follow up hit. The TV show continues to promote new talent including Don & Dewey - It was Otis who gave Don Harris the nickname "Sugarcane".

As the 1950's rolled into the 1960's the musical tastes of the public once again shifted; this time towards heart-throb teen idols, vocal groups (particularly girl groups) and Surf and Hot Rod bands. Otis set up a Eldo records but with little success and he drifted away from the music scene. After the Watts Riots he became active politically within the Los Angeles community. Otis wrote a book "Listen To The Lambs" which portrayed the communities he grew up in with all their talents and yet they were disenfranchised from the pursuit of the "American dream". He stood for election to the California Assembly (but as he campaigned as Johnny Veliotes, rather than Otis, he probably failed to pick up as many votes as could have been expected and he did not win a place. ). Vote for Johnny Otis: Don't forget to remember to register to vote (184KB mp3).

Johnny Otis continues to paint, sculpt and write as well as presenting a weekly radio show.